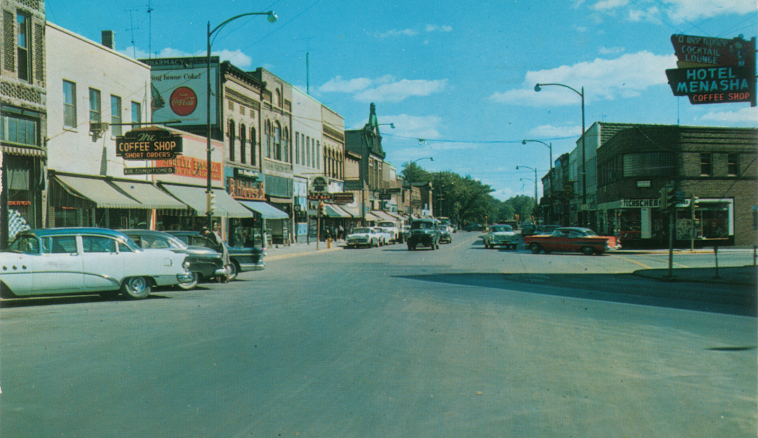 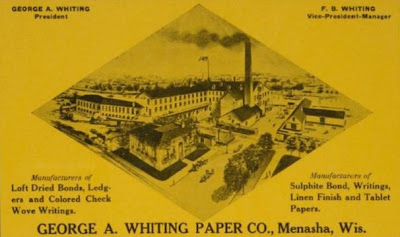 The George A. Whiting Paper Company mill was built on the site of an abandoned dry dock located on the west end of the Government Canal in 1882 by George A. Whiting I and the Gilbert Brothers- Theodore and William. The company was known as Gilbert and Whiting until 1886, when Mr. Whiting bought the Gilbert interest. It was equipped with one small 76" trim, Fourdrinier paper machine and other machinery necessary for the manufacture of rag-content paper.

On August 24, 1888, a serious fire ravaged the mill and, when the firemen turned a stream of cold water on a hot steel bleaching drum, a disastrous explosion occurred, killing 16 spectators and firemen. The mill was rebuilt by Mr. Whiting, and the same paper machine, with some improvements, is still in operation.  About 1910 the mill discontinued the manufacture of rag-content paper and switched to the making of high grade chemical pulp specialty papers.   The business was conducted under the name of "George A. Whiting Paper Mills" from 1886 until April, 1911, when Mr. Frank B. Whiting became associated in the business with his foster father. It was incorporated at that time, and it has been known as the George A. Whiting Paper Co. ever since.  George A. Whiting I died in June, 1930, when Mr. Frank B. Whiting succeeded to the presidency. Soon after Mr. Frank Whiting's death in March, 1952, his only son, George A. Whiting II, took over the reins as president.

Posted by David at 12:26 AM
Email ThisBlogThis!Share to TwitterShare to FacebookShare to Pinterest